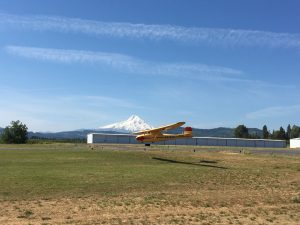 I have been helping out at the airport a lot recently, mostly assembling gliders. The first glider I helped assemble was a silent2 electro, it’s a high performance electric self launch glider. I also helped with a schweizer 2-33 training glider the the glider club recently purchased and with a schweizer 2-32 that was donated to the club-it is a three seat tour glider. A highlight was meeting Jerry Wenger, a well known glider pilot who has a collection of antique gliders. The pictures are of one of his gliders. I enjoy being a part of the glider club and getting to be around other people with the same interests as me. It’s fun just to hang out at the airport and I am getting to do that a lot more now that I am starting to get to know more people.

There was recently a new plane released for my flight simulator. It’s a 737-300 made by IXEG (International X-plane Engineering group). When the plane was released it came with a blank white paint scheme so you can make your own livery if you want. I decided to try and make an Alaska Airlines livery because it didn’t come with one. I started by doing some research and gathering reference photos, and then I used Photoshop to edit the photos and paint the livery. This was the first time I had tried making one so it took me about five hours. This is how it turned out. 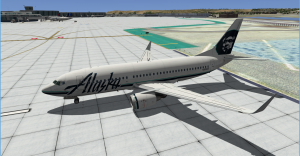 Making the Alaska livery was fun and it turned out fairly well so I decided to make another one. I didn’t now which one I wanted to make so I went on to a forum where people where making requests for liveries. After searching for a while I found a Titan Airways livery that looked interesting. The process of making the Titan Airways livery was the same as the Alaska one but this time it went much faster, it only took about an hour or so. This livery was challenging because I had to hand paint the swoop. 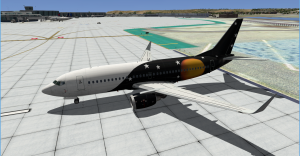 The next one is for a virtual called Zon Executive this one was much simpler than the previous ones but it still looks nice. 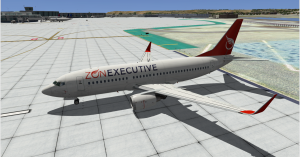 I first got into cubing when I found a Rubik’s cube at my grandpa’s house. I played around with it for a while but couldn’t figure out how to solve it. I decided that I wanted to learn how so I brought it home and looked up how to do it. I practiced for a while but I never really memorized all the algorithms. I took a break for some time, but I soon got back into it. I started trying to memorize the basic algorithms again and this time I was able to do it. Now that I could solve the cube I wanted to get faster, so I started practicing every day. Eventually I got my time down to an average of 1 minute and 30 seconds but then I got stuck. I couldn’t get my time any faster and I suspected that the problem was the cube, so I researched speed cubes and found one that was much better quality. With the new cube I got my time down to a 50 second average, and that’s where I am now. My current fastest time is 39 seconds.

Squeak of the tires

Rush of the air

The smell of burnt avgas

When I think of gliding the first thing that comes to mind is sitting in the glider on the runway smelling burnt avgas from the tow-plane. Then I think of giving a thumbs up to the ground crew and the lurch as the tow-plane starts rolling down the runway. The next thing I think of is the slowly building rush of air as the two aircraft accelerate into the air. Once I have been towed to a sufficient altitude I release the tow rope with a pop and bank right to avoid the tow-plane. After releasing from the tow-plane everything gets quiet. It is exhilarating to be free of all noise but the wind and to not have to rely on an engine to keep you flying. Eventually drag and gravity force me to perform the most challenging and exciting part of the flight, the landing.

The Rubik’s Cube was invented in the mid 1970s by a sculptor and architect Ernő Rubik. It was originally meant to help students understand 3D objects by showing how a single peace could be moved without scrambling the rest of the cube. Ernő discovered that it could be used as a puzzle the first time he scrambled it up and tied to restore it, he field for a patent in 1975 calling it the magic cube. Later he wanted a more recognizable name to trade mark so in 1980 he renamed it to the Rubik’s Cube. The first test cubes where produced in late 1977 and sold in local toy stores. The magic cube was held together with interlocking plastic peaces instead of magnets in order to discourage pulling it apart and putting it together solved. In 1979 a deal was signed and the cube was released world wide. Its first showing was at at the toy fairs in London, Paris, Nuremberg and New York in January and February of 1980.

It took the inventor over a month to figure out how to solve his own puzzle.

I cant think of what to blog about, so I am going to write the first thing that pops into my head.

On march 27, 2015, Scott Kelly was launched on a Soyuz for the first year long mission aboard the International Space Station. The main goal of the one year mission is to study the biological effects of long term space flight in order to help with planning for the Mars Mission. While on the space station the crew exercises daily in order to help minimize bone loss and muscle atrophy. They do this with the help of specialized exercise equipment, for example, tread mills and resistance devices that try to simulate the effects of gravity in a micro gravity environment. The crew also studied how fluids in the body shift while in micro gravity and how they effect vision by increasing intracranial pressure. The one year crew will also be studying the psychological effect of living in a confined space for an extended period of time. They will be required to keep a journal to document their experience.

I like to watch the research that is going into preparing for the Mars Mission.  I find the process of space flight fascinating.

I have been interested in 3D art for a while. The first program I used was blender, mostly because it is free but also because there are a lot of free tutorials online. Blender is great for making assets and small things, but it is not the best for making large scenes or games, which is what I have been interested in lately. I have thought about using unity before but until recently you had to buy it, now though with the release of Unity 5 it has been made free so I thought I would try it out. At first it took me a while to get used to the new controls, but once I did I started just playing around. Here is one of the things I made while I was experimenting.

I like the Airline Pilot Guy podcast because it brings all the most interesting aviation news stories into one place. Its also nice to hear the opinions of the hosts because most of them are airline pilots. Airline pilot guy is a podcast that talks about news and current events in aviation. For example in the latest episode the hosts Captain Jeff, Dr. Steph, and Captain Nick talk about an Atlantic flight that had to return to the airport after a laser strike injured the first officer, how dangerous lasers are to planes, a US plane with a bleeding body found in the cargo hold along with millions of rands, and a fake study that found 90% of plane landing are just barely pulled off. They also read feed back and questions from the listeners, feed back usually consists of questions about aviation or just stuff the people think the community might be interested in.

Here is a link if you are interested in listening

Photogrammetry is the science of making 3D measurements from 2D photos. Photogrammetry is often used to make 3D maps and object on maps like buildings, it’s also used to make 3D models for animations, video games, and movies. In order to make one you need to take a lot of overlapping photos of the object you want to capture. Then you need to put the photos into software that uses the over lapping parts of the photos in order to find the position of the camera relative to the subject. Once the software knows where the photos where taken from it makes a rough 3D point cloud from measurements it took from the photos. Next the software makes a dense point cloud with more detailed measurements. Once the software has a dense point cloud it makes a mesh which can be used in a game, map, or movie. The software can also generate textures for the models using the same method.

I think its cool that you can take 2D photos and make a 3D model.

^Here are some that I made^ The link is for a test game that I made from one of my scans. (controls) W.A.S.D to walk, and mouse to look. To run the game unzip the folder and double click on the .exe (only works on windows)