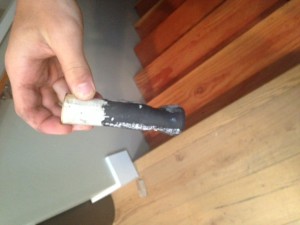 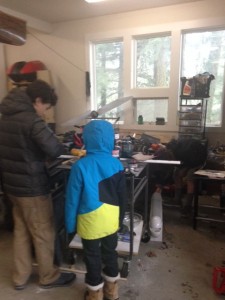 This week we attempted the first launch of the sugar rocket. We packed one of the rockets and added a stick for stability, then we brought it outside for the launch. We used a peace of PVC pipe clamped in a vice as a launch pad, we stuck the stick in the PVC so that it was sticking straight up. When we tried to launch the rocket the engine burned but the rocket was not able to lift off. The second launch we tried making a smaller hole in the engine and that seemed to help a bit, the rocket made it off the launch pad this time but it only flew a couple of feet. Next we tried mixing different fuel with more potassium nitrate in it, I was hoping that this would make the fuel burn faster because the potassium nitrate makes oxygen when it burns. Unfortunately the next launch with the new fuel failed too, the fuel actually burned slower with the extra potassium nitrate. I’m going to trie to research how to make the fuel burn faster so that next week we can try again. We also might try making lighter rockets that need less thrust in order to fly.